× Home About Us Get Involved Focus Campaigns Information Contact Resources 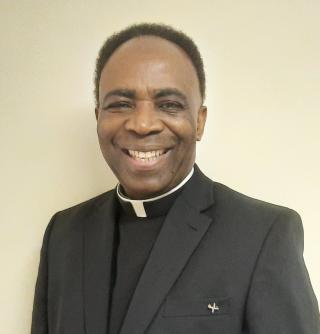 Aniedi Okure is the General Promoter for Justice and Peace, for the Order of Preachers (Dominicans), the Permanent Delegate to the United Nations, and is the Director of Dominicans for Justice and Peace (DJP), Geneva. For over nine years, he served as the Executive Director of Africa Faith & Justice Network (AFJN), Washington DC, and was Executive Officer for Jubilee USA. While at AFJN, he engaged US lawmakers on advocacy for just US-Africa policies. He expanded AFJN activities to Africa and initiated the formation, and training of Civil Society Groups based on the Scriptures and Catholic Social Teaching and mobilizing them to advocate for systemic change in many African countries. AFJN is currently active in nine African countries, promoting just governance and advocacy to change the structures of injustice, tackling issues of human trafficking, violence against women and children, land grabbing and dislocation of families.

For about seven years, he served as Coordinator of Ethnic Ministry at the United States Conference of Catholic Bishops (USCCB) and conducted intercultural competence training for international pastoral ministers through the Extension Program at Loyola Marymount University in Los Angeles. He is a coalition builder. While at the USCCB, he brought together African clergy and religious working in the United States for form the African Conference of Catholic Clergy and Religious (ACCCRUS). He initiated and guided the formation of AFJN’s Women Empowerment Project. He served as Vicar Provincial for North America and the Caribbean, Dominican Province of St. Joseph the Worker Nigeria, and Ghana (DPSJW). He was chaplain and lecturer at Obafemi Awolowo University and taught at several universities in the United States. He studied at the Dominican Institute Ibadan, Faculté de théologie catholique de Kinshasa, University of Ife, Boston University and The Catholic University of America. In addition to his Dominican formation, and training in philosophy and theology, he holds a master’s degree in religion and culture, a master’s degree in social sciences and a doctorate in sociology.

No Upcoming Events Yet!